Posted by qualityhealthcareplease in care for aliens, Cost Shifting, medical ethics on March 26, 2016

The simple answer is because healthcare providers on the front lines believe all lives are worth saving.  And, they will refuse to kill people by withholding care just because society says they should.  If society is so stupid to hire aliens, to pay aliens, to house aliens, to feed aliens, and not have a guest worker program then the healthcare system unequivocally refuses to be “the wall” — ask any doctor who sees a 19 year old with an appendicitis — they will fix the problem and ask questions later.

Here is an actual case:  18 year old Manuel (not his real name) is brought by ambulance to the emergency room after a fall and is barely breathing.  He is placed on life support then the ER doctors ask the on-call doctors in the intensive care unit to admit him.  No questions are asked, he is admitted.

The background later became clear.  Manuel’s father was killed in Mexico by a drug cartel leaving his widow and several children.  Manuel could not find work in Mexico so he crossed the border to find work to support his mother and his siblings.

He was hired by a contractor to build bleachers for a local school football field.  When Manuel fell off the bleachers and hit his head it was the contractor who called the ambulance.  There was no money to pay the hospital bill which was over $100,000 — all the services were a loss to the hospital and doctors.  And yes, this case and many others like it are passed on to the public and insurance companies through higher rates.  That’s how our healthcare system works — like it or not.  It’s been that way for decades.

The ACA with the push for universal insurance makes this under-the-radar care more obvious.  The ACA prohibits payment for illegals.  However, as many large counties in the US have found it is less expensive to provide healthcare, especially for pregnant women, rather than emergency care.  One case of cerebral palsy due to complications of pregnancy can cost millions of dollars.

Manual’s case includes some disturbing facts:  drug abusers in the US are the reason drug cartels exist and in this case were the root cause of Manual’s need to work.  A contractor to a government entity (the county school district) hired Manual and did not provide insurance or workers compensation.

The school district took the lowest bidder for the bleachers and did not specify the workers should have workman’s compensation insurance.  The school district should be responsible for the medical bills but they could not afford the medical bills — the hospital did not try to bankrupt the school with suits.  There was talk of sending Manual back to Mexico by air ambulance, but the health care system in Mexico could not provide high level care.  Absolutely nobody wanted Manual removed from life support because he was an illegal alien — if they did, they would be an accessory to murder.

So, the bottom line, the healthcare system is not ever going to be an accessory to harming people.  Be thankful.  If your son can’t find his insurance card and goes to the ER with an appendicitis he will get care — they will not tell him to go to the parking lot and just die.

US Healthcare Expenditures — what’s going on?

Between 2013 and 2014 prescription drugs increased by 9.8% and net insurance cost (i.e. profit) increased by 12.1%.  If life expectancy was going up at the same rate it would be a good deal — but, that’s not happening.

Despite the complexity there are rather simple solutions.

The table below lists the expenditures for various categories of health care.  The figures are in millions of dollars.  The total expenditures for US healthcare in 2014 were over 3 trillion dollars. 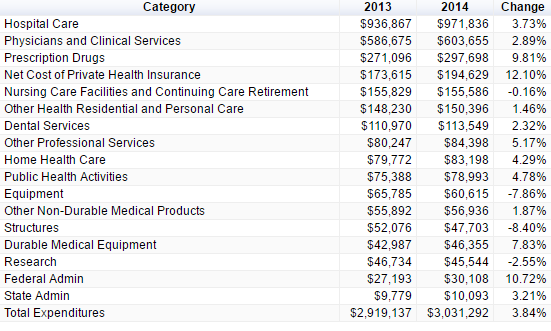